In 2011, 41 countries experienced water stress (lack of water of acceptable quality for drinking and household needs) - 10 of which are close to depleting their reserves of renewable fresh water and must now rely on alternative sources. Increasing drought and desertification exacerbate the situation. It is predicted that by 2050 at least one in four people will experience the effects of water scarcity.
Ensuring universal access to safe and affordable drinking water by 2030 will require investment in adequate infrastructure, improved sanitation and hygiene at all levels. To mitigate water scarcity, the protection and restoration of ecosystems such as forests, mountains, wetlands and rivers is necessary. It is especially important to raise awareness of water use issues. It is possible to increase the efficiency of water use through the development of innovative technologies in the field of water intake and drainage, as well as increasing the share of reused water and the quality of its treatment not only for drinking but also for technological and agricultural needs. An important role is played by the econ, ohmic accessibility of new technologies for all segments of the population.

Uzbekistan is a state located in a semi-arid region, which receives 80% of the required water resources from neighboring countries located in the upper reaches of the rivers. Located downstream, Uzbekistan uses water from its two main transboundary rivers (Syr Darya and Amu Darya) for the needs of its agriculture. The country is very dependent on irrigated agriculture, which is about 17% of GDP. Agriculture provides jobs, directly and indirectly, for about 40% of the population of Uzbekistan and is almost completely dependent on irrigation of all major crops. The total annual water consumption in Uzbekistan averages 51 km3, of which about 46.8 km3 or 90% is used in agriculture.

An assessment of future water demand shows that today the need for water for irrigation and other needs is not fully satisfied, and in the face of climate change, the shortage of water resources in Central Asia will increase significantly. Even with an increase in the drainage basins of the Amu Darya and Syr Darya rivers, the volume of water will not satisfy the growing demand. The deficit in this case will be 8%, and with the same stock, 15%. But if the flow decreases, the deficit will reach 33%.

According to official figures, approximately 88% of the urban and 79% of the rural population have access to tap water. However, only 17% of users have continuous access, and more than 65 percent of users receive water for less than six hours a day. The situation is especially difficult in rural areas, where regular breakdowns of equipment are often found, or there is no centralized water supply system at all.

Compared to access to central drinking water services, access to central city sewage services is much more limited. The effective coverage rate is estimated at 17% and is limited to approximately 70 cities. Built in the 70s and 80s of the last century, it is largely outdated and in poor condition. Wastewater treatment capacity has also dropped dramatically, which often makes it difficult to remove contaminants. 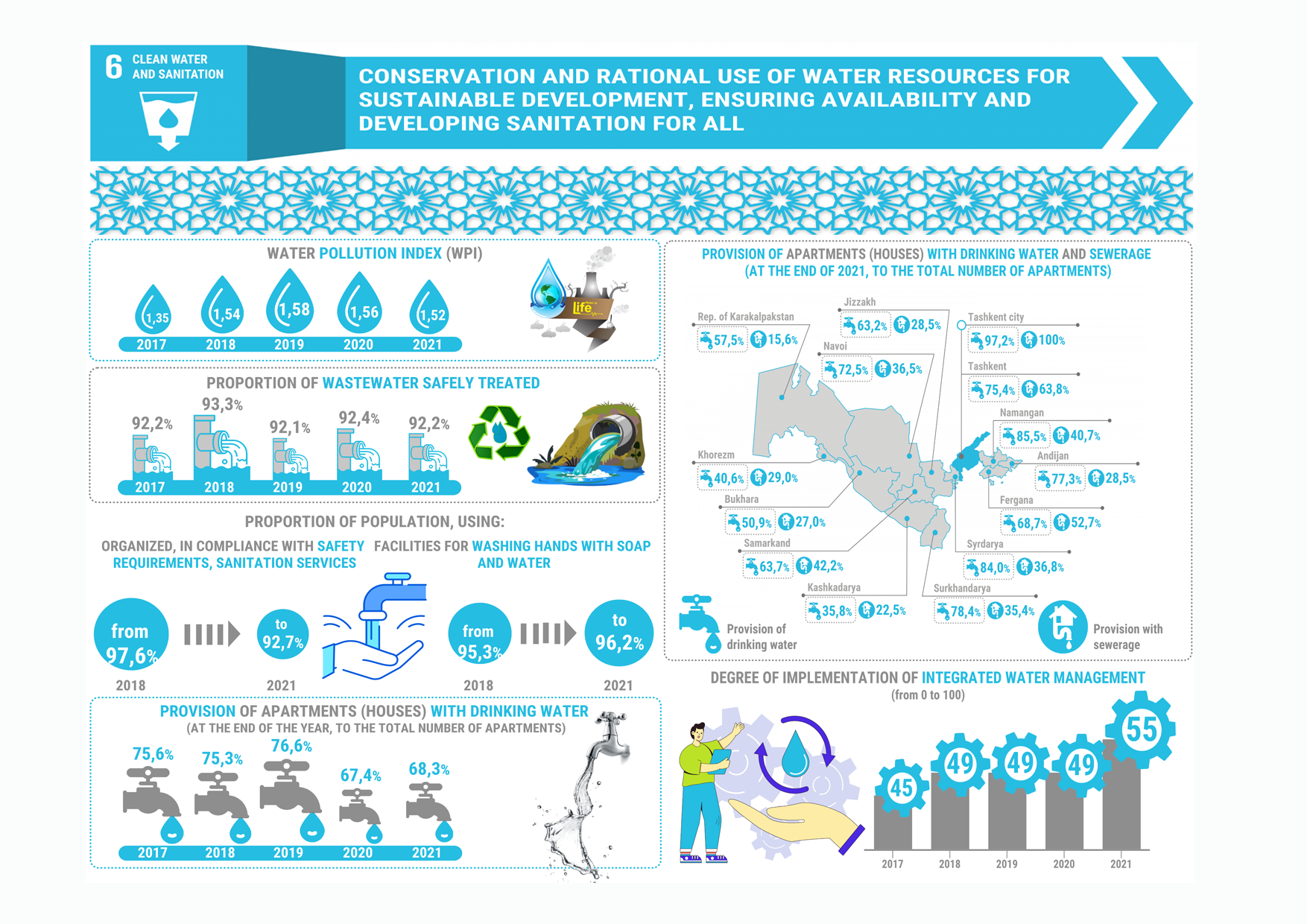 Target 6.2. By 2030, ensure universal and equitable access to adequate sanitation and hygiene for all, paying special attention to the needs of those in vulnerable situations.

Target 6.3. By 2030, significantly reduce any pollution of the aquatic environment, including as a result of land activities and increase the scale of safe reuse of wastewater.

Target 6.4. By 2030, substantially increase water-use efficiency across all sectors of economy.

Target 6.5. By 2030, implement integrated water resources management at all levels, including through transboundary cooperation as appropriate.

Target 6.b. Support and strengthen the participation of citizens self-government bodies in improving water and sanitation management.