Today, for the majority of the world's population, it is difficult to imagine life without access to energy. The global access deficit decreased from 1.22 billion in 2010 to 759 million in 2019. Despite the significant effort made, there may still be as many as 660 million people without access worldwide in 2030. In addition, the COVID-19 pandemic will impede progress on future electrification.

In 2019, 66 percent of the global population had access to clean cooking fuels and technologies. For the period 2010–2019, most of the increases in such access occurred in the most populous low- and middle-income countries and territories: Brazil, China, India, Indonesia and Pakistan. People reliant on polluting fuels and technologies are exposed to high levels of household air pollution with serious consequences for their cardiovascular and respiratory systems, increasing their vulnerability to diseases.

It should be remembered that a global economy dependent on fossil fuels and an increase in greenhouse gas emissions are causing drastic changes in our climate system. Efforts to stimulate clean energy have led to the fact the share of renewable energy in total final energy consumption increased gradually from 16.4 percent in 2010 to 17.1 percent in 2018.

Ensuring universal access to affordable electricity by 2030 means investing in the development of green energy sources such as solar, wind and heat. Adopting effective standards for a wider range of technologies can also reduce global energy consumption in buildings and industrial facilities. Expanding infrastructure and improving technologies for clean energy in all developing countries is one of the most important tasks that can stimulate growth and help protect the environment.

Uzbekistan contains large reserves of minerals, including hydrocarbon reserves. According to British Petroleum, Uzbekistan takes 17th place in the world in natural gas production, and 24th in reserves. However, resources are rapidly depleted and, at current production rates, reserves will run out by 2035. In addition, the economy of Uzbekistan is one of the most energy-intensive in the world. For example, the energy intensity of a country's GDP is 35 percent higher than in neighboring Kazakhstan, and three times higher than in Germany. The industrial sector, which often uses outdated technologies in the production process, accounts for about 40 percent of all energy consumed in the country.

The Government of Uzbekistan, in its national Low-Carbon Development Strategy, identified three sectors as the priority, which account for the highest energy consumption and greenhouse gas emissions: electricity generation, heat supply and buildings. In particular, the housing sector (mainly residential buildings) accounts for half of all greenhouse gas emissions associated with energy consumption (about 80 million tons of CO2-eq. Per year). Given the expected steady population growth (according to UN estimates, the population of Uzbekistan will increase by more than 20 percent over the next 15 years), accompanied by growth in new construction, energy consumption in residential buildings, and emissions are projected to grow by 30 percent to 2050.

The government of Uzbekistan aims to reduce the energy intensity of the economy by about 50% by 2030, as well as ensure universal access to affordable, reliable, sustainable and modern energy for all. To this end, government programs are being initiated to modernize key energy-intensive sectors of the economy. 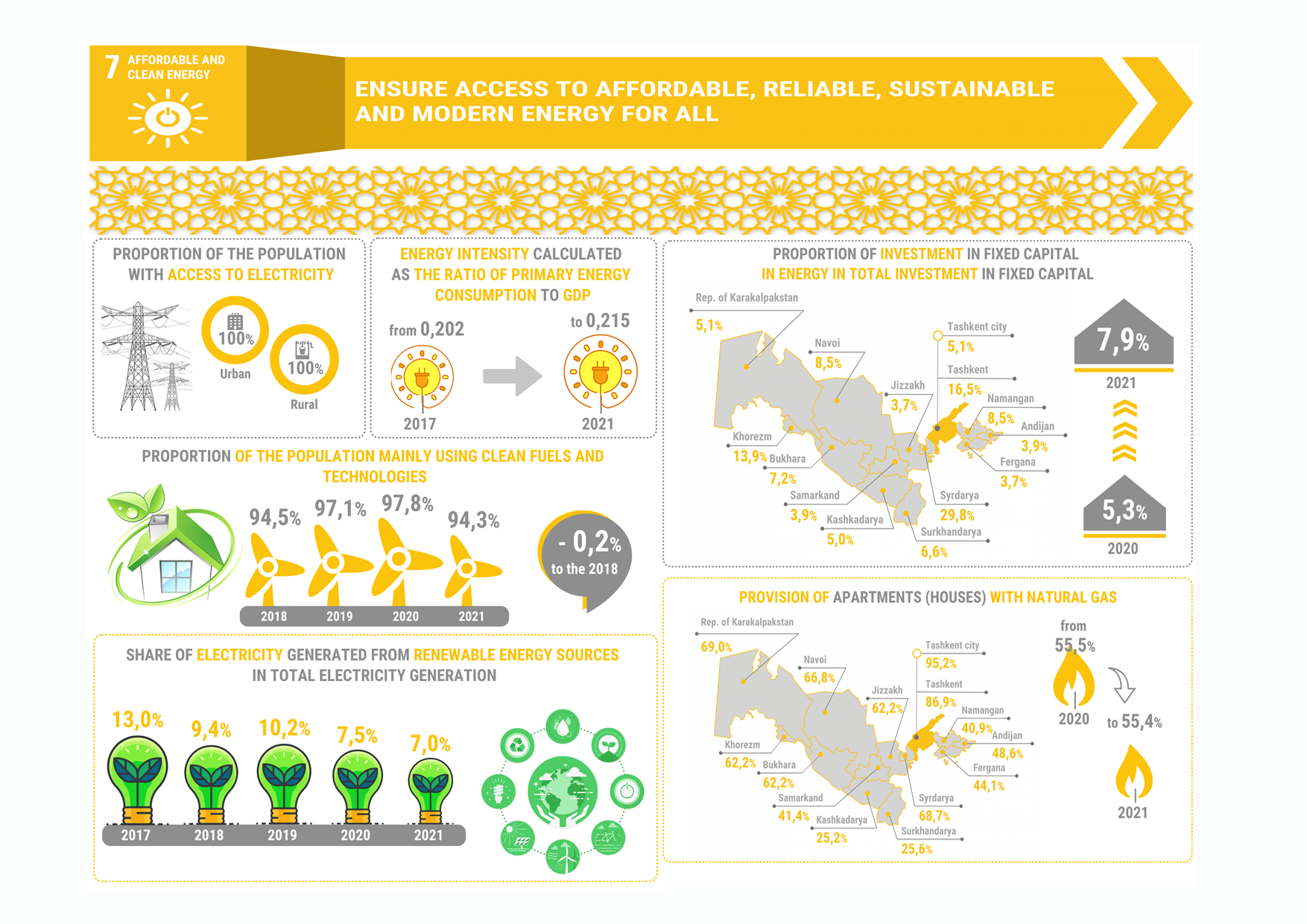 Target 7.2. By 2030, significantly increase the share of energy from renewable sources in the energy balance.

Target 7.3. By 2030, double the global rate of improvement in energy efficiency.

Target 7.b. By 2030, expand the infrastructure and upgrade technology for supplying modern and sustainable energy services.

1) For individual years, the data have been recalculated