There is no country in the world that does not experience the dramatic effects of climate change. Greenhouse gas emissions continue to grow and currently exceed the 1990 level by more than 50 percent. In addition, global warming is causing long-term changes in our climate system, thereby threatening irreversible consequences.

Changes in temperature, sea level rise, periods of abnormal heat in winter or cold in summer, heat waves, weekly heavy rains, droughts, floods, extinction of plant and animal species are just some of the effects of climate change. It affects almost all aspects of human life - economy, economy, health. This problem will affect everyone - from a small farmer to a businessman, but especially the poor and vulnerable segments of the population, as well as women, children and the elderly.

The annual losses from tsunamis, tropical cyclones and floods amount to hundreds of billions of dollars.

Helping more vulnerable regions, landlocked countries, and island states to adapt to climate change must go hand in hand with efforts to reduce the risk of climate disasters. It is necessary to limit the increase in global average temperature to within two degrees Celsius, which will require political will and a wide range of technological measures.

Climate change cannot be stopped, but its negative effects can be mitigated. Economic losses due to climate change by 2030 are measured in the amount of 3.2% of global GDP. Measures to combat climate change will create more jobs and increase wealth.

Uzbekistan is among the countries most vulnerable to climate change. Since 1880 the average annual temperature in the country has increased by 1.6 degrees Celsius (from 13.2 to 14.8 degrees), exceeding the global average. It is predicted that in 2030-2050 the temperature in the Central Asian region may increase by another 1.5-3 degrees Celsius. Here, the largest temperature increase is expected in Prearalie, because specific local climatic changes are taking place there due to the desiccation of the Aral Sea.

Climate change and the natural disasters triggered by this process pose certain risks to food security, the well-being of the population and the development of Uzbekistan, a country where the contribution of the agricultural sector to GDP remains quite high.

A sharp change in temperature conditions, a decrease in water resources, an increase in natural disasters and a decrease in agricultural productivity are serious risks for the sustainable development of our region. Climate change impacts disproportionately affect the most vulnerable.

A third of the total population lives in areas of natural hydrometeorological disasters (droughts, mudflows, landslides, floods, avalanches, frosts, dust storms, heat waves), where the situation may worsen due to increased precipitation, temperature and evaporation.

The Ministry of Emergency Situations report on the work carried out in 2020 to protect the population and territories of Uzbekistan from emergencies noted that there were 53 natural emergencies in the country in 2020.

Direct economic losses due to natural disasters in GDP amounted to 0.024 percent. In the global volume of CO2 emissions into the atmosphere, the share of Uzbekistan decreased from 0.27 percent in 2018 to 0.25 percent in 2019. 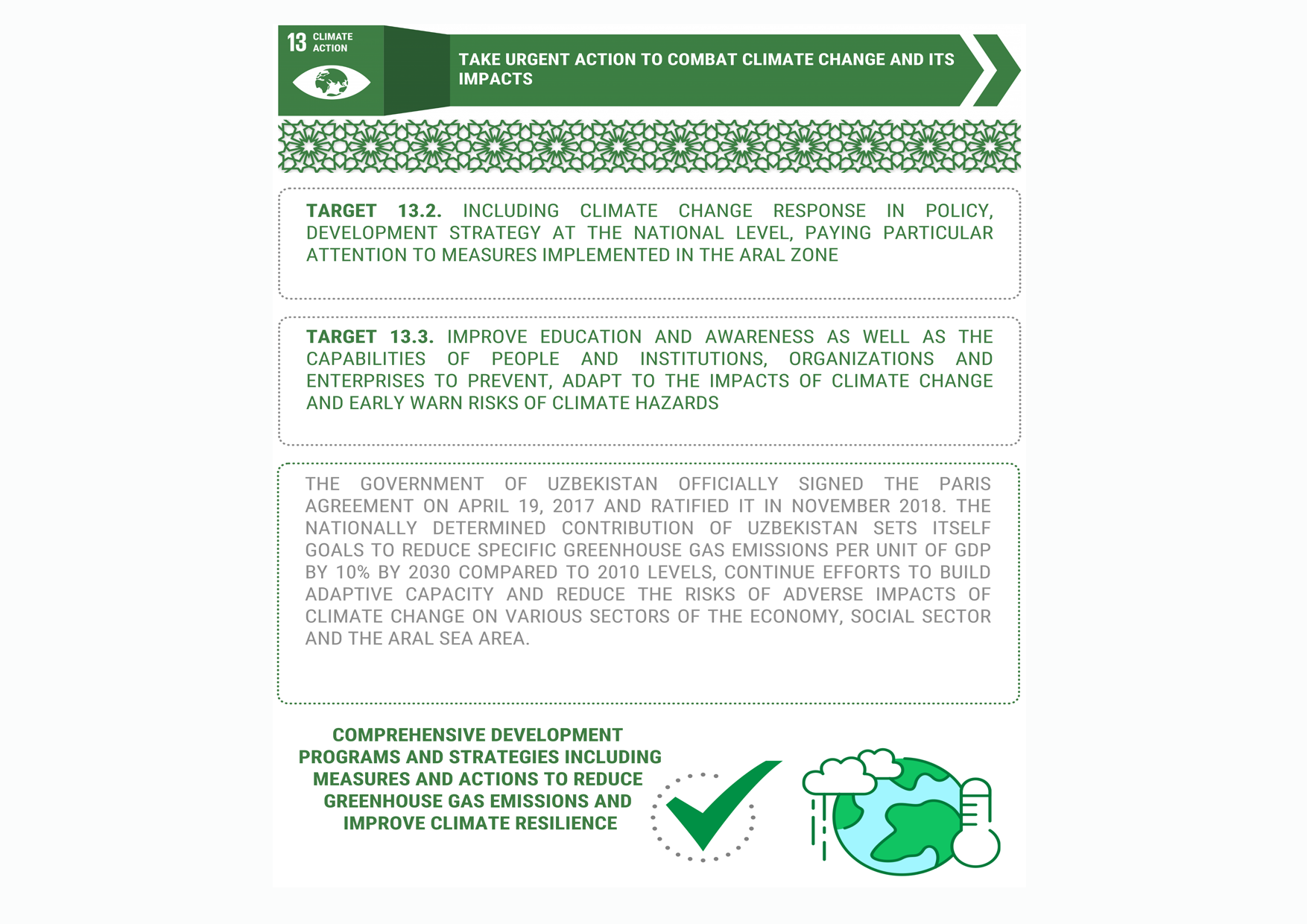